The socialist version of the master plan is the general’nyi plan, or general plan (GenPlan for short). It is important to insist on terminology here. Socialist general plans—and the intimated processes required to instantiate them—differ measurably from so-called capitalist master plans in scope of ambition and temporal persistence. Socialist city making is not hemmed in by the mercurial objectives of countless, shifting private property owners. As a roadmap for urban improvement within a centralized economy, the general plan can, and often did, propose radical physical change to the city and persist for decades. The immensely influential 1935 Moscow General Plan drove urban decision-making in the Soviet capital until the 1970s.

Even as a specialist trained to read images (I am an architect and urban designer), I concede that the general plan drawing is a particularly alienating visual genre. There are a few possible reasons for its inscrutability. The first has to do with scale. A general plan aspires to a municipal scale of intervention. To capture this scale in a singular drawing, the drafter employs abstraction: she removes human-scaled details to highlight an overarching metropolitan vision. The resultant drawing is diagrammatic. Untrained viewers have difficulty understanding how actual people occupy such abstract space. Second, like most orthographic drawing types, general plans rely upon disciplinary conventions. A designer can look at a plan and recognize the language immediately. Non-designers have to shift repeatedly between key and plan—if there even is a key—to comprehend the most basic information that the drawing conveys, an off-putting process to be sure. Lastly, in the Soviet case in particular, the GenPlan prepared for popular consumption was made purposely obtuse. By 1935, the NKVD (People’s Commissariat for Internal Affairs, predecessor to the KGB) oversaw all cartographic work in the USSR, and map sharing was made a criminal offense.[1] General plan drawings were still published in the Soviet press, but they were neutered: drained of any nitty-gritty details that might be construed as strategic.

Given the difficulty of the task, why even bother to analyze the general plan drawing? Because it is the primary document necessary to understand socialist space-making. Urban theory is crystallized in the general plan; without it, we cannot measure the distance between theory and physical reality.

It must be said up front that a proper general plan is much more than a drawing alone. A case in point is the 1927 Baku Plan, directed by Moscow planner Aleksandr Ivanitskii and discussed below. Ivanitskii prepared a four-volume report that narrates the Baku planning project in great detail.[2] Included in this report are precedent studies, demographic data sets and pricing tables for various illustrated schemes, all of which clarify client and designer motivations. But too often an historic general plan illustration has been decoupled from its supporting documentation, so let us focus on what information the drawing alone can disclose, and how to elicit it.

In the interest of comparative analysis, I offer up two general plan drawings that figure heavily in my current project on the foundation of socialist urban theory and practice in the early USSR via three key sites (Baku, Magnitogorsk and Kharkiv). Here, we will look at Ivanitskii’s 1927 Baku Plan and the 1932 “Sotsgorod Magnitogorsk General Plan” directed by Frankfurt architect Ernst May. Although produced just five years apart, the Baku and Magnitogorsk plans fall on either side of the heated 1929-30 debates on socialist settlement. When the Baku Plan was being devised in the mid 1920s, the planning charge was to provide a socialist overlay for the pre-revolutionary city; iconoclastic urban reconfiguration was not the objective. When Magnitogorsk was under development in the middle of the First Five-Year Plan, population dispersal was the ascendant planning paradigm. Magnitogorsk was intended to be the testing grounds for a new industrial-residential settlement type, set deep in the Soviet hinterlands. The ideological and morphological characteristics of each of these moments are drawn into the plans, as we shall see. To provide some commonality, the two plans selected for analysis are drawn at approximately the same scale, and both encompass a populated core plus pertinent contextual surroundings. 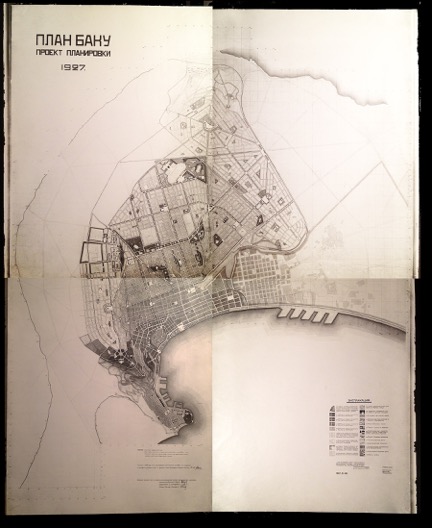 Reading a general plan drawing is deductive work. Look first for any textual information. Who was the author of the plan? Who was its client (this still matters greatly, even under a centralized economy)? On what date was the plan completed? Read the key carefully, if one exists, as its categories reveal the preoccupations of the planning effort. In Baku’s illustrative key, the city is broken into height and density zones, broad categories that render the city blocks “background” fabric. The rest of the key highlights civic infrastructure: boulevards, parks, social and cultural centers. Many of these amenities are not new to the city, but they are reframed as institutions and spaces of proletarian ownership. The Magnitogorsk plan is too poorly printed for the categories to be legible, but they are simply numbered in positivist fashion. The plan’s text style is also open to interpretation. All of the text is hand lettered for Baku. The letters are simple sans serif, but they bear the mark of the calligrapher nonetheless. The Baku plan reveals itself to be deliberately authored, an artifact of NEP culture. In Magnitogorsk, the lettering is stenciled, a mechanical process in which the drafter sets downs the template, colors in the form, and in so doing conceals her personal signature in perpetuity. Magnitogorsk was a project for which architectural standardization was paramount, a position that is confirmed by the dispassionate aesthetic language of the plan. 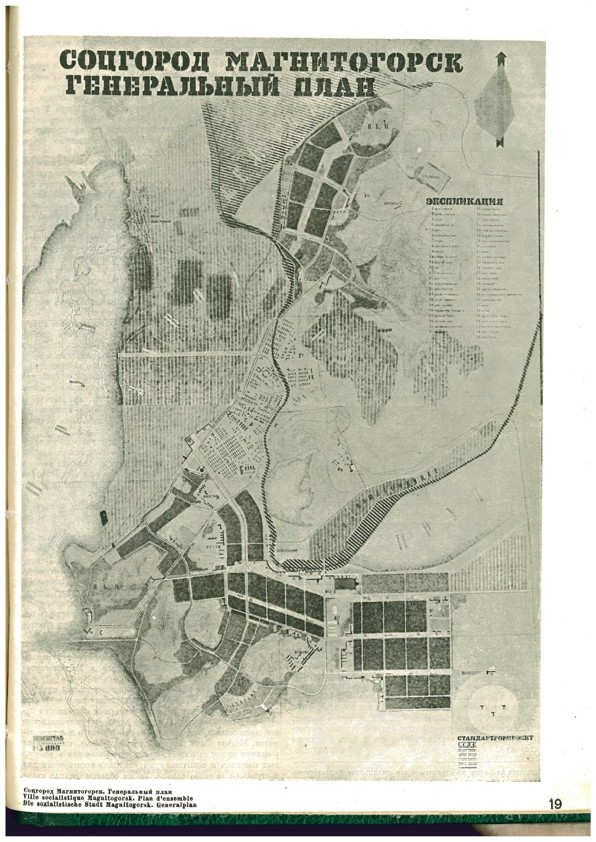 The fundamental form of the city resides in the relationship between the street and the non-street. So, we ask next: are built or open spaces stressed in the plan? As noted above, the Baku plan is interested in urban exceptions not in the standard city fabric, which is rendered an unremarkable grey wash. The blocks serve as three-dimensional backdrops, defining spaces of interaction. The white of public streets and squares pops out of the page, as does the black of parks, boulevards and civic buildings. Because it is a NEP-era plan, morphological hallmarks of late 19th c. European models are present, like the broad green boulevards that link parts of the city. But the Baku plan is also appropriate to socialism: it envisages a robust public culture lived in the streets, open spaces and institutions built for the working class. The Magnitogorsk plan is a different animal altogether; it elides any hierarchy of built and non-built. Amorphous industrial zones (the striped swaths) dominate the plan and shoehorn any recognizable built fabric into residual slivers to the north and south. The planning team attempted to give weight to the residential neighborhoods in black, but the overriding impression of the GenPlan is of an insatiable industrial complex. Magnitogorsk was the model project of the First Five-Year Plan’s hyperindustrialization drive. Its plan does not lie.

These limited observations illustrate the depth of material embedded in the general plan drawing. In summary: approach the image with a series of targeted questions.

Certain observations culled from the plan can stand alone, as the above examples demonstrate. But an equal number of “hunches” elicited from the drawing will require intense textual research to follow. An hour—or more!—spent looking closely at the general plan illustration will yield richer research questions, shake loose and sometimes clarify puzzling pieces of textual data, and draw out the complexity of the space making process.

Christina Crawford is a PhD Candidate at Harvard University, a Registered Architect and urban designer whose work focuses on design strategies particular to periods of intensive transition. Her dissertation explores the foundations of socialist urban theory and practice in the Soviet Union through Baku, Kharkiv and Magnitogorsk, three sites conceived, planned and constructed during the First Five-Year Plan. Christina received her B.A. in Architecture and East European Studies from Yale University, and her M.Arch from the Harvard Graduate School of Design (GSD). She served as Vice Consul in the U.S. Consulate in St. Petersburg, Russia, and received a Fulbright Fellowship to Ukraine, where she researched post-Soviet Ukrainian architecture and urbanism. Christina practiced for several years as an architect and urban designer in Boston and taught architectural history and theory at Northeastern University. She is currently working with Eve Blau on a book entitled Baku: Oil and Urbanism.