In recent years, scholars have demonstrated the critical role that the Gulag played in building socialism under Stalin, the exercise of power and ideology in this totalitarian regime, and ordinary people’s interactions with the Stalinist state. While much of the Gulag’s history in the Stalin era remains to be examined, a few scholars have begun to explore how its post-Stalinist dismantling and transformation shaped Soviet state and society in subsequent decades. 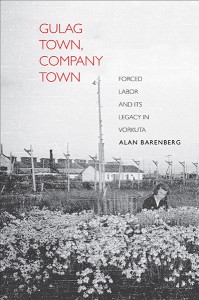 A chief example of this recent scholarship is Alan Barenberg’s Gulag Town, Company Town: Forced Labor and Its Legacy in Vorkuta (Yale University Press, 2014). In this richly researched study of Vorkuta, Barenberg (Texas Tech University), chronicles how a town and its residents participated in the larger transformation of the Gulag during and after Stalin’s rule. For students of socialist cities, this book is of critical importance for several reasons.

First, Barenberg’s study is one of the few we have on a particular category of socialist cities: the Gulag town. Alongside other categories–such as atom cities and closed cities–the Gulag town was a peculiar type of Soviet city that scholars have only begun to examine in studies of socialist urbanity. His book, therefore, contributes to our understanding of the different types of cities (and their respective planning, economy, political functions, and social composition) that socialist regimes developed over the course of the 20th century. In addition, Barenberg challenges the fundamental assumption (applicable to atom cities and closed cities as well) that the Gulag town was separated from the rest of Soviet society. He shows instead that the barriers between camp inmates and city dwellers were substantially more fluid in Vorkuta than expected and that such contacts strongly shaped how residents managed the transition to a “company town.” Indeed, transition and transformation are key parts of this city’s and its residents’ stories. And what the experience of Vorkuta suggests is that change–in greater or lesser degrees–was likewise a fundamental aspect of socialist urbanity. The socialist city, in other words, was not a static phenomenon immune to changes originating from within, and perhaps its greatest and most intriguing transformations occurred not at the beginning or end of the socialist experiment, but somewhere in between.

Ekaterina Kalemeneva is a PhD student and a research fellow of the Center For Historical Research at the Department of History, Higher School of Economics in St. Petersburg. She received her MA degree in History (2014) from the European University at St. Petersburg. Her dissertation project, “‘Making the Arctic comfortable’: projects and practices of urban development of the Soviet Far North in the 1950s-1970s,” explores changes in urbanization models for the Soviet Arctic territories since the 1950s, when the issue of “northerness,” which implied the requirement of special approaches for creating urban and social structure in northern industrial settlements, became topical in many research fields including urban planning. The research is focused on the aspiration of architects from Leningrad to create a new conception of the “northern city”. Through that case, she analyses the colonial practices of symbolical and social assimilation of sub-arctic Soviet regions and their changes after Stalin’s death and the issue of the contradictory position of experts’ knowledge during the Thaw. In 2011-2013 she participated in the international research project “Assessing Arctic Futures: Voices, Resources, Governance,” funded by the Swedish Foundation for Strategic Environmental Research MISTRA.

Ana Kladnik is a Leibniz-DAAD Fellow at the Centre for Contemporary History (ZZF) Potsdam. She obtained her PhD in History in 2013 from the University of Ljubljana. Her dissertation, “The Formation and Development of the Socialist Town in Czechoslovakia and Yugoslavia, 1945-1965,” is situated at the crossroad between the history of modern urbanism and the history of everyday life. It investigates the transformation of ‘socialist’ and mining towns in a comparative perspective in Czechoslovakia and Yugoslavia during the first two decades of state socialism. She is preparing her dissertation for publication. Since 2009 she has been lecturing at the Charles University and has also lectured at the University of Pittsburgh. Her current project aims at a social and cultural history of volunteerism in Central and South Eastern Europe during the transition from state socialism to liberal capitalism.